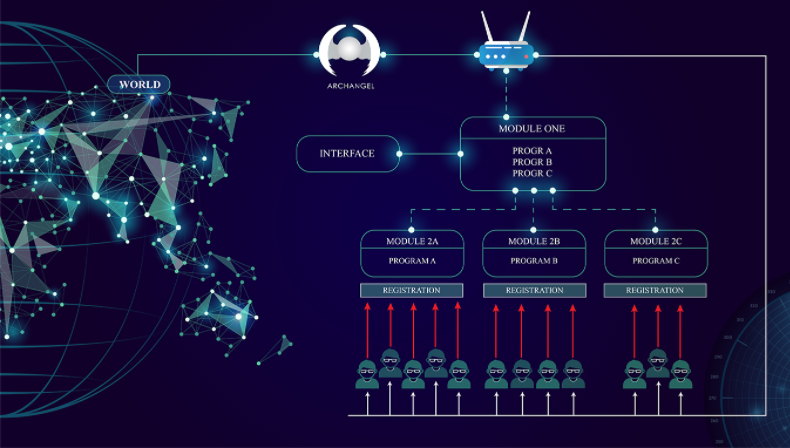 All-IN-ONE is THE IT Security Solution from PT SYDECO it is based on the principles of ZERO-TRUST and is designed to prevent cyber-attacks such as Ransomware or data breaches, in the event of an attack, allowing computer networks to continue to function by preventing viruses or worms have any effect and prevent lateral contamination in the tissue.

All-IN-ONE IT Security Solution from PT Sydeco focuses on protecting the resources (all data and computing services) of an establishment or enterprise, such as assets, data, services, workflows, networks. Sydeco's ALL-IN-ONE IT Security Solution protects all enterprise assets (devices, applications, virtual and cloud components) and subjects (end users, applications and other non-human entities requesting information from resources).

PT Sydeco's ALL-IN-ONE IT Security Solution, thanks to its Micro Segmentation Architecture to reduce the attack surface, limits attack impact and prevents lateral contamination within the enterprise.

The company's computer network, in any enterprise or establishment is protected by ARCHANGEL©, an advanced firewall created by PT SYDECO which is one of the components of the All-IN-ONE IT Security Solution.

ARCHANGEL© protects servers, computers and other connected objects from cyber-attacks originating from the outside world and prevents the spread of lateral virus contamination within the company.

Servers, computers that are on the company's internal network and which are connected to ARCHANGEL© itself are protected by SP-One©.

SP-One©, which is another component of the ALL-IN-ONE IT Security Solution, is a program and system that creates an airtight, secure shelter around source code or programs used in office, administration, or university computer networks. Cloud and in SaaS.

SP-One© protects servers, programs or Source Code against any cyber-attacks from the outside world and against those coming from within private computer network.
Figure 2: ALL-IN-ONE (Archangel, SP-One & SST) protect Servers

It follows that if a user accidentally or intentionally contaminates his computer, the virus or worm he has downloaded can only try to attack the server he is connected to. And this server is protected by SP-One, so not only the user will not be able to infect the server connected to it but also no other server in the network.

All data moving within the internal network or outside, in the outside world, is protected by SST©, Secure System of Transmission, which is another creation of PT SYDECO, and delivered inside the VPN.

SST© protects data by encrypting it without using a key, without any third party intervention, using artificial intelligence to do so.

SST© also protects all passwords used in the All-IN-ONE IT Security System.

VPN are created by ARCHANGEL and encrypted by SST©.

This is E2E protection and only the receiver can read the data. The data will disappear if someone tries to intercept it.

C. Security On data at rest

Backup Data is protected by SP-One and by Logic Micro Segmentation Architecture used by ALL-IN-ONE systems. Finally all data even when at rest, is encrypted by SST©.

ALL-IN-ONE protects ICS endpoints from SCADA (Monitoring Control And Data Acquisition) or DCS (Distributed Control System) against worms such as StuxNet, or viruses such as ShaMoon or Trojan Horses such as BlackEnergy and will avoid disruptive activities or services.

ALL-IN-ONE protects ICS ENDPOINTS' as a whole, servers, communication networks through which data and instructions pass, data itself, terminals and individual components.

The ZERO TRUST ARCHITECTURE of the ALL-IN-ONE system, by partitioning the enterprise network into sub-systems, namely the enterprise network, control network and industrial network, which are separated from each other by security devices such as firewalls, ARCHANGEL ONE WAY, reduces the exposure of industrial infrastructure to threats and prepare systems for enhanced installation monitoring and incident detection.

Of course, the security of any device, any server, program, data, depends not only on the element of material protection but also and most importantly on respecting the strict policies governing access to the installation, its use and behavior in case of a problem.
Figure 4: Zero Trust Architecture & Micro segmentation of ALL-IN-ONE protect DATA: They are in a DMZ (Demilitarized Zone)

But, thanks to the ZERO TRUST architecture and the elements that made it up, including the ARCHANGEL ONEWAY, or SP-One, there will be no more:

- Disruption in the services or operation of the ICS for example, due to blockage, delay in the flow of information, destruction or malicious encryption

- Unauthorized modifications to the system or its deactivation due to unfriendly penetrations or instructions that are illegal and harmful and which are of a nature such as to cause enormous human, material or financial damage,